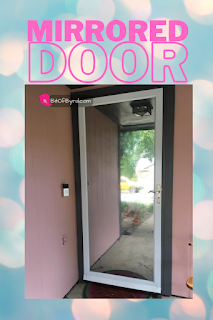 I used to have a half glass storm door that slide up to allow breeze in. It didnt lock and and it didnt feel super secure.
When I had my siding replaced I storm door to this full glass door. It did come with a full screen insert but the glass would have to be removed to put the screen door in and I just saw a giant sheet of glass being broken while I had the screen door in. I threw away the storm door and keep the glass in all the time.
I bought mirrored window film. I bought it at the local big box store. My neighbors installed smaller sheets first and let me use their application kit.
I actually installed this film by myself and I was concerned about installing such a large sheet but it worked out. I searched for application tips on line and the best tips I found are below.
-Cut a sheet larger than needed
-Turn off fans and other things that spread dust
-Clean the glass
-Liberally spray the glass and the film (after the backing is removed)
I used a large folding table to hold the film. Then removed the backing. I sprayed both the inside of the film and the glass. I sprayed them A LOT. I was able to slowly carry over the large sheet and was very careful that it didnt fold into itself. The reason the spray is so important is it allowed me to wiggle the film when placing it on the glass.
Once I had the film positioned I used the squeegee card that came with the application kit to remove all the water from the spray. Having the water to squeeze out was much easier to manage than air bubbles. After removing all water I used the sharp blade to trim off all excess. There is an amount of shrinkage that occurs when the remaining water dries out but it is so minimal it isnt noticeable.
Things to know about the mirrored film. It is one sided. That means during the day it is a mirror outside and I can see out but people cannot see in. Even if someone is standing on the porch and I am standing at the door they cannot see me. Also, it does not create a darkened entry inside. However, it means that in the evening people can see in the house so I deep the front door closed.
Installing this film is one of the best upgrades I have made. The door locks and offers an extra layer of security for my home. I love the ability to see who is on my porch and the light having the front door offers.
Byrd House Renovations diy DIY Weekend