on March 21, 2012
Having great decorations doesn't mean people will be having fun. You have to have ways to entertain people.
The age range for the party that we threw was 1- 17. Talk about an age range! 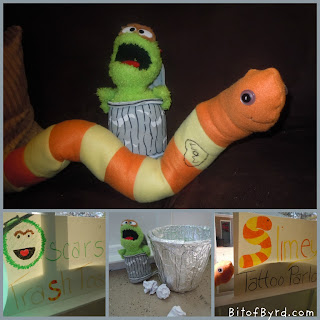 We had two main games or activities that were Sesame Street (SS) themed.


Oscar's Trash Toss was easy to set up. We found an existing trash can in the house and covered it inside and our with foil. We then drew on the details on the outside with a permanent marker. Junk mail made up the trash.
The older kids became our judges and ran the game while the younger kids tried to throw the trash in. It became a competition and they had fun.

Slimey's Tattoo Parlor was stocked with SS tattoos that were purchased from ebay. An adult maned this station with a bowl of water and a sponge.

The signs for each game were made with a simple poster board cut in half and pastels. I choose pastels over markers because they color was so much bolder.

I also found a Elmo tomato toss game. It was a really cute game where the tomato vibrated and Elmo giggled. You were supposed to pass to the tomato until Elmo stopped laughing but the day before the party the tomato stopped working correctly so we didn't play it at the party.

Other games that kept everyone amused were air hockey, the XBox and deflated balloons that the children (annoyingly) inflated and then deflated over and over.

Another post will be dedicated to stuffed characters found in each station.