on March 20, 2012
Yesterday we talked about how to set the theme before people get to the party with the invite. The next step to set the mood is with decorations. So our SS theme continues! 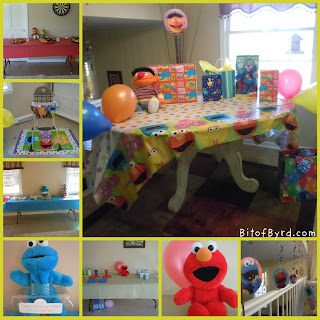 Party City had SS decoration half off! That is where the hangers, the theme table cloth and the high chair set came from.

We mixed solid colors from the Dollar Tree to cut costs and to make sure that SS was the star of the show.
Each table had a character featured. 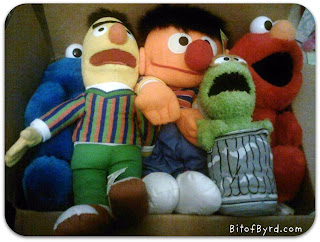 Where did I find the characters? Well I did not buy them new and spend $15-$20 on each one! I went to antique shops and Good Will and resale shops. I was able to find all the characters in one afternoon and I spent no more than $20 for all of them!
This is where you have to plan ahead so you aren't searching around at the last minute. You need to decide what characters are important to your party and start the search. Get others involved too so they can keep and eye out.

Now, not every character will be found. Like Slimey, Oscar's best friend/pet worm. So we made him!

We made Slimey with fleece. 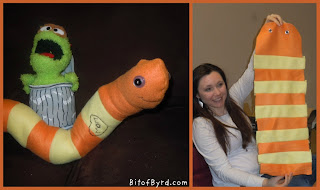 As seen in the picture, he was just strips put together and then his head was a half oval. The eyes were a white button and a black button sewn on top of one another.

Slimey does have a wire hanger inside of him so that we could make him do the classic Slimey stance instead of just laying there. I then hand stitched the tattoo  on him since he is 'running' a tattoo shop.