Going to the Sock Hop | Made a Poodle Skirt

on October 24, 2011
I have massive amounts of felt at the moment so I decided to make a poodle skirt. I already own saddle shoes and I found the perfect black shrug too that I am going to embellish with my Cricut. look for that post later this week. 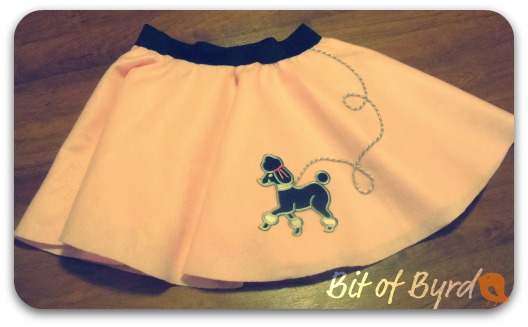 This skirt was the easiest skirt to ever make!


I followed the tutorial I found over at MADE called The Circle Skirt.

I used her steps to cut my outside and inside circles. 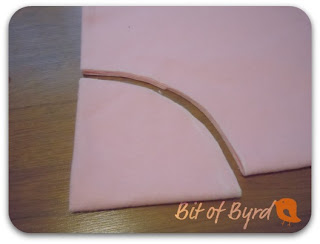 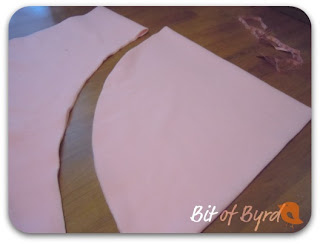 The skirt did come out a little shorter than I hopped or would have liked, but that is what happens when you are measuring yourself I suppose. To get it longer than what the fabric would 'allow' you just make two halves instead of one piece. The one piece was SO easy though! Love it!

Then I added my waist band, which is just a piece of elastic.


I sewed one line, pulling the elastic taught as I went and then I was done sewing! Using Felt is awesome, because you dont have to hem or finish edges!

Next I got to embellish my poodle skirt. 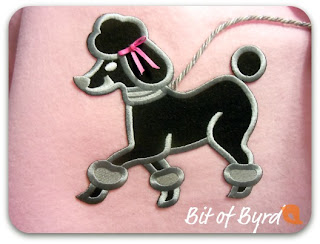 Here are my thoughts about my poodle:: The one at Walmart said it was a sew on. This black one said it was an iron on. It does not iron on well to felt. It ended up being hot glued. I could have hot glued the one from Walmart.
Add your rope before you glue it all down so the end can be hidden. I also just hot glued the rope down. I created the bends how I wanted them and then hot glue. BAM.

Now that fancy little bow... that is a pin-inspired creation!

Here was my pinspiration::


and this is how it came out:: 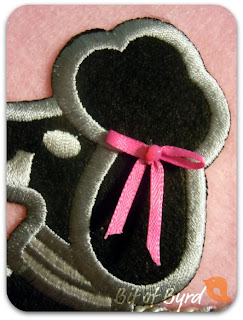 I added a dollup of sparkle in the middle of the knot. I will tell you that in step 2 I thought the front ribbon was under the last prong.. it is not. I only had to try twice to get a perfect little bow!

Then my skirt was done! 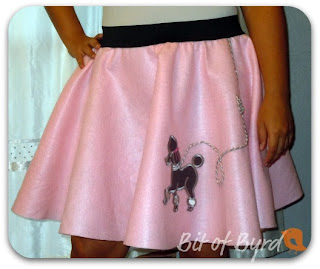 It falls just above my knee. I was hoping for mid calf to under the knee. Oh well. I think it is cute and the whole costume will come together well. I get to wear it when helping a friend DJ this weekend at a local bar/restaurant. Fun stuff!

My BFF, Brittany, over at The Butterfly Mom is going to sport a skirt too. Her's will be longer and since there will be two of us that will be easier to do LOL. We will be doing that this week too.

What are you going to be for Halloween? Do you usually make or buy your costume?