on August 11, 2011
When my sister Apryl turned 18, we had an Alice in Wonderland Party. I have mentioned a few other times.

I love wreaths. It is easy to tell this when you look at my vast wreath pin board via pinterest

I had seen a Balloon wreath over at How Does She? That was my inspiration for my Cheshire Cat wreath. 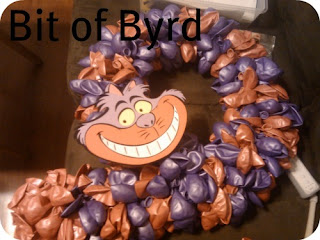 Things I needed:
-Balloons I used almost 500. that many wouldnt have been needed. but i liked it overly full
-Wreath I used a pool noodle
-Rubber bands
-Floral pins
-Duck Tape

With just that I could have created a great wreath... but I needed a face, and as it so happens for Christmas I had bought myself a Cricut. And the AIW cartridge was just about to be released.

I pre-ordered it. And it was exactly what i needed! 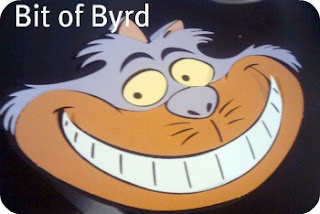 So unfortunately I do not have any pictures from this in the making. But it was very easy. The tutorial for the Balloon wreath is basically what I followed.

A few adjustments.
I actually put a whole bag of rubber bands on the pool noodle. Then I taped the 'tail' into place. You can see in the picture it looks almost like a "9". Just duck tape.

That makes it hard to understand but if you head over to Meet the Newcombs, that is where i had the idea about the rubber bands and you can see if her picture how they arent all facing the same way.

I used the floral pins to cover the duck tap and the end of the tail where I couldnt get a rubber band to hold.

I hot glued my Cheshire face on and magic happened! 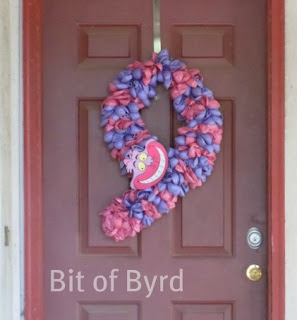 Everyone that came in loved him!

-Don't leave him outside too long, the noodle sags and the balloons get worn so they cant be used for anything else.
-Plan ahead if you need specific colors so you can buy the balloons online. If I would have bought them online I would have saved so much. As it was I had to buy about 4 bags of balloons from party city... read.. not cheap!

If you have questions, let me know!

keep following me down the rabbit hole as I show you my other AIW crafts.