on May 27, 2011
Conquer might be a bit of a strong word since my sewing machine and I often still have to agree to disagree... but this if more about my first sewing attempts.

If we want to go way back, my grandmother is someone who believes in making sure we (grand kids) know how to sew a button and do a basic stitch (which is the running and the blanket stitch)

But since that is void of electricity or a foot pedal I never really saw that as sewing. I now disagree, because hand sewing is a favorite relaxing thing, but not my story today lol

Christmas 2008, my mom bought a Brother sewing machine and decided we were going to sew aprons for our family members (I will try to get someone to send me a picture) They were the kind that the pattern already had the lines and everything so we cut... batted...sewed...and felt pretty good about ourselves. But this was really my mom's project and my help was limited in many ways to making the ties and turning them inside right.

In the summer of 2009 I was introduced to the Three Wolf Moon Shirt, see the review there. This review meant I HAD to have that shirt! My sister needed one too... but mine... I wanted it to be different. 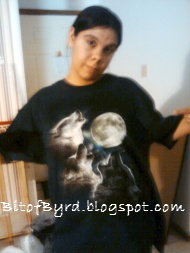 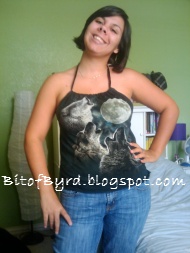 I bought a pattern on sale from Joann's and I made my shirt.. it even has elastic in the back! I was so pleased with it that when Halloween talk started going around I decided... I can make my own costume!

Gulp. So I committed to three of my friends that they didnt need to worry... I would make our costumes! We would be the Flintstones and the Rubbles. Of course, I made the confident statement before finding out that the pattern was retired and could not be bought in stores. Luckily I was able to find it online for reasonably priced (read as: less than $5 but I would have paid more because my mouth jumped ahead of my brain and my wallet would have had to pay the difference)


In this adventure I bought all my fabrics... way too much because I didnt know that the amounts were on the package. I sewed my first zipper...
and I was so happy with how it turned out... 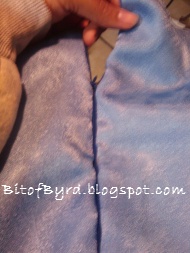 Only to realize I wasnt at a point where I knew how to sew with a lining yet... so this fabric... and this zipper didnt get used.
I did end up sewing two other zippers for Betty and Wilma's costumes and they came out great. That is when I found out sewing something for someone else was much easier than me because I could pin it on them... Wilma's dress only took 30 minutes to sew after pinned. 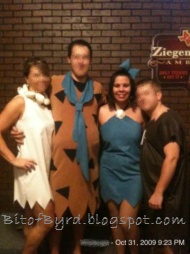 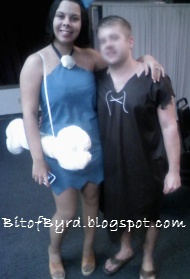 I also made that giant bone purse! It was all on the fly, with no pattern and I LOVE how it came out, it was the perfect accent to the costume.
Skills I learned in this project:
So what was your first  sewing project? How did it turn out? What did it inspire next?
ps... yes it is 3am... insomnia is crazy and we dont get along!